As we continue to read on the mythical origins of navigation, ever so gradually entering into nautical technicalities, we came to a passage where the importance of the magnetic compass for navigation is mentioned. The word used is al-maghnātīs, magnetite, or rather, given the context, a piece of lodestone or naturally charged magnetite. As expected, Ibn Mājid tells us that the craft of navigation is not complete without it. What is unexpected is the scriptural turn: this maghnātis was an invention of King David (yes, the Biblical and Qur’anic prophet), and moreover, it was with this stone that he killed Goliath. 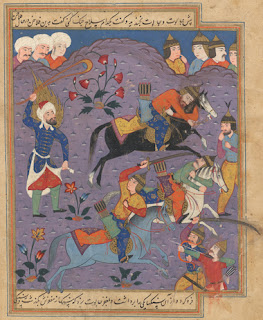 From a manuscript of Stories of the Prophets
Spencer Collection, The New York Public Library.
David stands on the left with his sling.
We do not normally associate a magnetic compass with violence, but this association echoes somewhat the violent origin of the word “route”, ultimately from the Latin (via) rupta, the broken way, as when someone breaks a way through and is “groundbreaking” and “trailblazing”. A “rutter” is, accordingly and originally, the testimony to a violent act, often having to do with braving the perils of long journeys, but essentially and always the internal violence of forcing the limits of knowledge.

The image of the giant, symbol of hostile ignorance and evil, as “the (magnetic) stone sank into his forehead” (1 Samuel 17), is a powerful reminder of the inner struggle of every scientific endeavour and of the image of the “crest-jewel” and the “sword of discrimination”. The implicit imperative, for anyone engaged in any path of knowledge, is the one in the Mahabharata: “Fight, son of Pandu, and win!” [JA]