The Spherical Wisdom of the Turner

As we plough on, degree by degree, through the details of the lunar mansions, which means coming to terms with the subtleties related to the intersection of synodic and tropical moon cycles, Ibn Mājid throws us yet another unexpected glimpse into a comprehensive cosmological vision underpinning the science of navigation—as every other medieval artisanship: “Understand this wisdom, only comparable to what is effected by the one who makes the spheres turn” (dawwār al-adwār).

All the rotating precision which makes orientation possible is thus devolved to its ultimate cause, the prime mover who, like a turner or a potter (a traditional Biblical image), keeps giving shape to the universe through the motion of a cosmic lathe—or revolving in his divine mind the archetypal ideas. 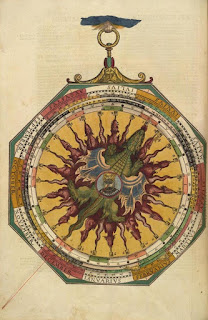 Astronomicum Caesareum, 16th century
It is little wonder that the ups and downs of sublunary existence are under the sway of a wheel, Fortune’s, which at times is like a tornado, and at times an immovable mover like the Ka‘bah (one of whose epithets is, precisely, dawwār). Same idea in India with the King of the World, the chakravartin, “through whom the wheel is moving” or “he who controls by means of a wheel.”

The Arabic divine name of al-Dawwār is quite uncommon in Islamic sources, but it’s all about the tornator—tornado and turner at once—qui tornavit coelum et terram, et sphaerica solis et lunae cunctarumque corpora stellarum torno suo, “who with his lathe turns heaven and earth, and the sphaeric bodies of sun, moon and all other stars”—or more concisely and familiarly: amor che move il sole e l'altre stelle. [JA]
Posted by Juan Acevedo at 13:44 No comments:

Do You Have What it Takes?

What does it take to be an Arab pilot in the fifteenth century? According to Ibn Mājid’s second Fā’idah, a great deal. It is not enough to master the astronomical and geographical knowledge needed to plan and to make a voyage in the Indian Ocean. Before all that, a pilot should be a person of great character. Learned and accepted among the people, he “should know patience from slowness, distinguish between haste and movement… moderate the words in his speech; be just, righteous and harming no one.” Otherwise —if he fails to meet such values— he is not a pilot in principle.

Such praise for a good character is not an innovation of Ibn Mājid. In Arabic literature on navigation, it is sometimes found linked to the pilots’ responsibility for maintaining a safe voyage. Writing in the tenth century, Buzurg ibn Shahriyār tells the story of a great oceanic storm and how the pilots were even then bound by oaths to preserve the well-being of his ship: “we pilots live with its peace and die with its ruin.” 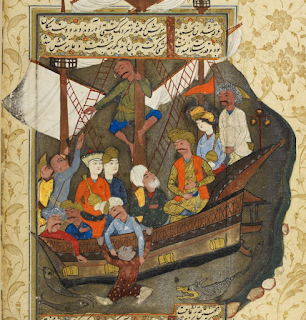 Following the second Fā’idah, the secret to meet such responsibilities is the combination of two factors: mastery of technical knowledge and possession of a great character. Holding such a combination, a pilot would be prepared to face the challenges posed by oceanic voyages. Thus —Ibn Mājid suddenly concludes—, if one is in possession of a great character, then he should begin to learn the twenty-eight Mansions of the Moon (manāzil). And so, we move to the third Fā’idah! [IB]
Posted by Juan Acevedo at 20:40 No comments:

Being didactic is a notable trait of Ibn Mājid’s style. These are not cold, detached manuals. Instead, you find throughout his works series of imperatives exhorting the “seeker”, the “questioner”: “understand and know, strive and realize your knowledge,” because “the cases and causes of the sea are many.”

Now, the first thing on the list is “the actual knowledge” of “the magic circle of the rhumbs and mansions (mandal al-akhnān wa-al-manāzil).” 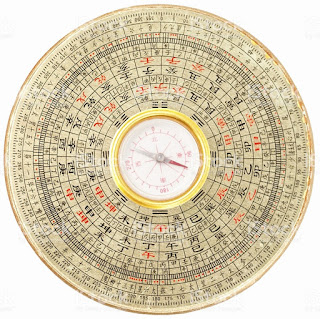 When Ibn Mājid elaborates on the details of the relation between the thirty-two rhumbs and the twenty-eight lunar mansions, on how to lay them upon the circle of the compass in order to plot your course, the immediate and unexpected analogy is that of the Far Eastern luopan, the geomantic compass (or Feng Shui compass), an outright “magic circle” where a central magnetic needle is surrounded by the concentric sequences of signs in spheres of knowledge. “Ponder and ask for advice, and wake the night and be resolute.” Every time, the pilot is virtually at the centre of the universe to perform his task. [JA]
Posted by Juan Acevedo at 10:59 No comments:

Last Wednesday we were once again taken by Ibn Mājid on an entertaining and unexpected detour, and once again on occasion of the magnetic compass (or rather on the stone itself, al-maghnātīs, lodestone). Adding to the association with King David, we learnt that according to other sources, the discovery of al-maghnātīs is due to al-Khidr, the enigmatic Qur’anic sage and immortal wanderer who looks after travellers and craftsmen… or according to others, it was discovered by Alexander the Great (Dhu’l-Qarnayn)—and anyway the two of them were cousins!

And then things took a cosmic turn: “For the seven heavens and the earth are suspended (or “held together”) by the Magnet of Power” (maghnāṭīs al-qudrah, but those uppercase letters certainly look appropriate here!). I have tried to find similar images in Islamic or other cosmologies, but so far it seems quite unique. There may be something in Indian or Chinese mythology, and it might shed light on the still debated ultimate origin of the magnetic compass. Suggestions are welcome.
Then, to round off his explanation, as if to make sure people get his meaning, Ibn Mājid regales us with the only thing he dared write “on such an uncertain matter”, which happens to be a love poem:

Now, this was unexpected: like Aristotle, when compelled to make understandable the basic force that holds the universe together, he calls upon love and desire. It is quite something to imagine the audience of Ibn Mājid reading these lines, but perhaps less than taking in the gist of his analogy: that from Ibn Mājid’s feet, to the planets and galaxies, to any little magnetic compass in our hands, the same cosmic force is drawing us and guiding us to our destination. [JA]
Posted by Juan Acevedo at 14:46 No comments: