We are so used to having international standard measures, printing machinery, and recording devices, that we lose sight of how many practical complications did arise when they did not exist. If you have a navigation instrument, which makes the difference between landfall and shipwreck, or the recipe for a medicine, which becomes deadly poison in an overdose, how do you ensure a fail-safe transmission of the necessary knowledge? The answer is simple: you only rely on direct transmission, “by word of mouth,” viva voce. Learning by the eye and by the hand has no substitute in practical arts. Nonetheless, those who know are driven to write ever-imperfect, intrinsecally flawed, or simply hopeful and well-meaning instructions for later generations.

In the context of Indian Ocean navigation, as mentioned last week, we know that it was not simply about an instrument or a set of instruments, but that a sophisticated system of combined and counterchecked observations came into play with the methods transmitted from pilot to pilot—also, symbolically, “from father to son,” as we had found earlier in Ibn Mājid. Last week we found in the Fawā’id a passing detail on the accurate usage of the altitude measuring instrument, the khashbah or “piece of wood” called kamāl in some specialised literature. 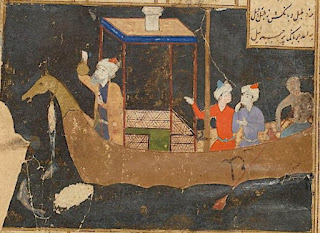 Immediately after that, Ibn Majid dedicates a few lines to explaining the “intellectual” (‘aqlī) nature of early nautical science, which comes from “the time of the prophets.” The astrolabe comes up as a token of those times, and its invention is attributed to Lāb, son of Idrīs, the archaic and enigmatic prophet, originator of the crafts and identified with Enoch and with Hermes Trismegistus. Ibn Mājid dares not criticise this prophetic knowledge, but the import of his text is clear, and partly explicit: a person needs to have arrived safely ashore many times, and to have faced disaster, before engaging in any pompous discourse about nautical matters. Caveat nauta!
Posted by Juan Acevedo at 15:33