The eighth lunar mansion, according to Ibn Mājid’s count, is yet another one of the parts of the ancient Arab constellation called the Lion, al-Asad. This Lion was so big that it provided material for about eight lunar mansions. It has been dissected and studied in detail by our colleagues at Two Deserts: One Sky, who call it a megaconstellation which “roared from January to May.”

The mansion we are reading about now, al-Nathrah is formed by stars so dimly visible, that they were compared to the droplets of a sneeze. They include, notably, what we call the Beehive Cluster (aka Praesepe, or M44), located at the heart of our constellation of Cancer. M44 was noted in European astronomy since Late Antiquity as nebulosa in pectore Cancri, “a misty thing on the chest of the Crab,” until Galileo resolved it and described it in his Nuncius Sidereus as as cluster of “more than forty small stars.” In China it has long had associations with ghosts and the underworld. 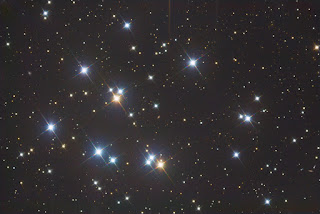 This is yet another example of how stars of lesser visibility can be used for navigation thanks to a sophisticated system of correlations and counterchecks. The nautical practice involves assiduously checking the celestial angles and the culmination points of certain stars, and it is extremely similar to the astrological use of paranatellonta (“the ones rising in combination,“ from παρανατέλλω). It required great experience and knowledge, and in turn it endowed the pilots with a remarkable degree of accuracy. This is why Ibn Mājid decries the vagueness of those pilots who said, “oh, it is just a trifle of an eighth of a finger’s difference!“ When a difference of an eighth of a (nautical) “finger” means a difference of twenty miles in your landfall, it can mean a difference between life and a shipwreck! [JA]
Posted by Juan Acevedo at 15:30