This week, by popular demand, we are expanding on last week’s cryptic and passing mention of the Indian and Chinese systems of lunar mansions. It is actually quite a remarkable fact in the history of science that this division of the ecliptic based on the sidereal month (not the synodic month of 29.5 days, but the time it takes the moon to orbit once around the earth with respect to the stars, i.e. 27.3 days) was and remained always relatively foreign to the highly syncretic Western astronomical system.

The 28 “mansions”, “way stations”, or “inns” were from very ancient times an integral part of Indian, Chinese, and Arab cultures (where they were called respectively nakshatra, xiu, and manzil) with a plethora of correspondences and an interrelated history that are yet to be fully probed and clarified.

What makes them urgently interesting for so many disciplines is that in the course of time they became essential to countless aspects of their related cultures, including, in our particular field of study, the art of navigation. They were crucial in timekeeping, astrology, magic, geomancy, agriculture, even to the point that personal names derived from the nakshatras are still common in India. In Arabic, their being 28 in number (sometimes in India 27 were counted) made them match the number of the letters of the alphabet, which gave rise to an “alphastronomical” view of the heavens.

Technically, this circle of twenty-eight asterisms includes variable numbers of more or less notable stars grouped around and along the ecliptic. They frequently overlap with stars of our solar zodiac, and quite often the yogataras or “determinative” stars of a given station are well-known in our astronomical tradition, like Aldebaran or Antares. They were often used in pairs of opposite ascending and descending asterisms (Arabic anwa’), which would be memorized and recited by sailors even until recent years, thus ensuring and furthering their practical usefulness, and they corresponded to a rich mythology. 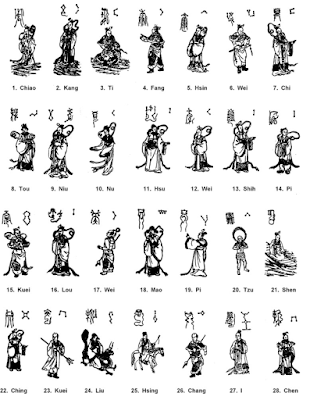 The supernatural figures associated with the 28 xiu in the Jade Box Scriptures
(see Exploring Ancient Skies, 2005).

The great antiquity of the system seems established by comparing precessional changes with the fact that the original series started with Krittika, the Pleiades—it must have developed around 2400 BC. And so, this week, as we start reading Ibn Majid on “the most auspicious” of them all, the mansion of the Pleiades (Arabic al-Thurayya, whence the familiar name Soraya), we will not only be dealing with 15th century Arab nautical astronomy, but touching directly on a very ancient and far-reaching doctrine. [JA]
Posted by Juan Acevedo at 00:42