“Can you bind the chains of the Pleiades?”, God asks of Job in order to put him in his place. The Pleiades, or the Seven Sisters, or the Jaguar, the Cabrillas, or many of the other names they are known by, are a constant in human culture from the earliest times. They guided Odysseus through the seas, and were mentioned by Hesiod; they were used for the orientation of sacred buildings from Teotihuacan to the Callanish Stones in the Outer Hebrides; and they were known and cherished, sometimes as the mythic heavenly original home, among New Zealand Maoris and Australian aborigines, in Micronesia, among the Colombian Kogi, the Mayan and all over the Andes. 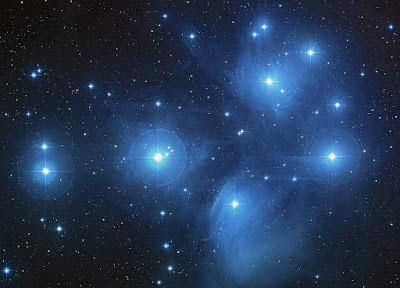 With such a trajectory, it is little wonder they have not only been the staple of astronomical lore and all its applications, but also of literature, as a testimony to the human need to look at the stars and to relate them to human life and its joys and miseries. If any asterism is witness to the deep-seated love of the stars in humankind, it must be the Seven Sisters. Sappho evoked them from her night loneliness, and this week Ibn Majid regaled us with several examples from the Arabian lands, for there, too, the Pleiades favoured love and abundance.


“They are like a flag and like a bridle and, because of their faint glimmer, they are like the wind passing through, and like unto the trembling earrings of a young woman torn by the pain of separation… and they glitter like a cup passing round a fire from hand to hand.”

Stars of saudade—the untranslatable Portuguese term for a nostalgia that does not belong to the past, because it is out of time, right in the middle of the heart. [JA]
Posted by Juan Acevedo at 00:29