Wrapping up the chapter on the Pleiades, speaking of their fame and importance, Ibn Mājid reports a remarkable couple of verses which he calls “the best I have ever heard on this matter”:


We are the Pleiades and Orion, we are Arcturus, and Spica and Betelgeuse,
While you are the contemptible stars, seen in the sky and yet unknown.

It is certainy striking that some of the brightest stars in the sky speak and boast about their status, but let us focus instead on the underlying epistemological subtlety.

What appears to make the lesser stars unknown, and perhaps even unknowable (lā tu‘lam), is their lack of name; the Pleiades and the others boast because they have proper names. In fact, even today most stars do not have proper names, and are simply called by a Greek letter and their constellation, e.g. Alpha Centauri. We can ask ourselves, what difference does it make in the way we know them?

In our times, the greatest example of a nomenclature enabling knowledge is perhaps Linnaeus’ binomial system, which in a way was a systematic and comprehensive baptismal rite, in the footsteps of Adam who named things in Paradise: it is just a human trait, and this is why some have spoken of man as homo nominator. Linnaeus himself quoted a remarkable legal maxim:


Nomina si nescis perit cognitio rerum.
If you ignore the names, the knowledge of things perishes. 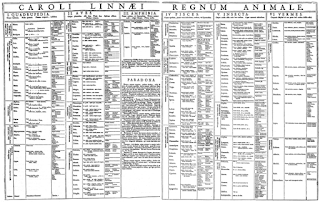 Arabic ‘ilm (as in tu‘lam above), Greek episteme, Latin cognitio—names of knowledge; names of a knowledge that depends on names. But as craftsmen and mystics show through the ages, there is another “tacit” knowledge, the trade secrets closer to taste, saber, sapere, dhawq, and more related to the senses and movement in general: an embodied skill proper to art and ecstasy, like Greek gnosis and Arabic ma‘rifa. To a certain extent, the two can thrive without each other, but the burning longing is always there, among scientists, technicians, artists and mystics, for the realization of knowledge, when understanding is embodied and the secrets are illuminated. [JA]
Posted by Juan Acevedo at 02:37