Shapes and Letters in the Sky

The sixth lunar station brought with it a mention of an early classic by the Persian astronomer Abd al-Rahman al-Sufi (d.986), the Book on the Shapes of Stars (Kitāb suwar al-kawākib), a harmonization between Ptolemaic and Arab lore, adding to the Greek heritage, and describing in detail forty-eight asterisms. The word sūrah (sing. of suwar) is commonly used to refer to a constellation: a shape, an image in the sky. It is also one of the common words used to translate the Platonic forms or ideas, the suwar aflātūniyyah. There is in this shared term more than a hint at the fundamental cognitive status of those shapes in the sky: it is a visual/aesthetic equivalent of their having a name by which we know them. 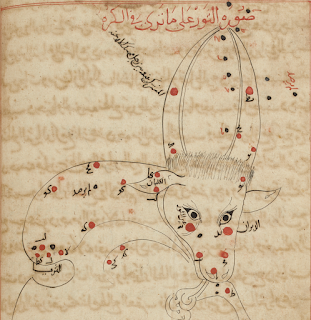 In late antiquity, constellations were also called stoicheia, the Greek word which meant at once “letters” and “elements”, and thus the zodiac was, accordingly, a circle of twelve celestial letters. In the picture above we can see Taurus in an illustration of al-Sufi’s work. The shape of the Bull may not be there when we look at the night sky, but the stars are articulated in a particular way to make it visible, to realise it. In the picture below, a sample from digital font design, we can see how letters are articulated along and around “control points”, to reveal the shapes we are intimately familiar with.

Iconology of the sky, whereby asterisms are readable as letters, conveyors of logos; and iconography of the alphabet, whereby letters are contemplated as images, objects of beauty. Inseparable mysteries of mimesis and language, of representation and meaning, and at the heart of both, the essence of craft (ars) and every technique: articulation—that oh-so-simple joining of the dots. [JA]
Posted by Juan Acevedo at 23:47