The Forelegs of the Lion

In ancient Arabian tradition, the constellation of the lion (al-Asad) was depicted in the night sky with two forelegs, al-Dhirā‘ān. It was greater than the zodiac lion familiar to the modern observer, for one of its legs was placed on Gemini (α and β, Castor and Pollux) and the other was on Canis Minor (Procyon and Gomeisa). Taken together—Ibn Mājid tells us—these four stars form the seventh lunar mansion: al-Dhirā‘ān. 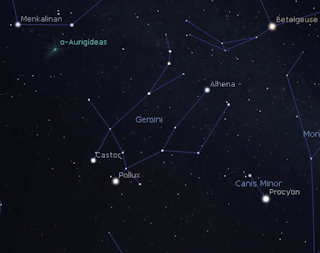 Where navigation is concerned, the knowledge of a lunar mansion also entails the knowledge of possible combinations between its elements and other stars or asterisms. This is so because the alignment between certain stars could indicate not only a specific course or time, but also—and perhaps most importantly—the altitude of the polar star and, thus, the latitude.
Beginning to read Ibn Mājid’s introduction to al-Dhirā‘ān, we readers are immediately apprised of its connection with the Two Vultures (Vega and Altair). Each Leg of the lion is said to rise nearly at the same place where each Vulture rises, but they are located on opposite sides of the sky. This way, by the time Vega is rising on one end, the lion’s leg in Gemini is setting on the other. Eventually, both asterisms are seen leveled just above the horizon—a signal to every pilot (mu‘allim, “the one who knows”) indicating that the polar star is then at its minimum height. [IB]
Posted by Juan Acevedo at 10:15